Sydney, Nova Scotia is known and the "World's Most Beautiful Island" and it certainly lives up to its name.  Located on the east coast of Cape Breton Island, Sydney was founded in 1785 by the British.  Sydney was the island capitol until 1820 when the colony merged with Nova Scotia and the capitol was moved to Halifax.

Off the coast of Sydney, in 1781 a war broke out between two French ships and a British convoy near the Spanish River, Cape Breton.  The convoy was made up of 18 merchant vessels of which they were headed to Cape Breton Island to pick up a delivery of coal bound for Halifax.  However, the British convoy suffered considerable damage and one of the ships called "Jack" was captured in the process.  The two French ships also took on damage.  Several sailors dies during the naval engagement of which 6 were French and 17 were British, and several more were wounded.

Sydney became home to the world's largest steel plants in the early 20th century.  Numerous coal mines, even some under the sea, were owned by Dominion Steel and Coal Corporation who fed the town's economy.

The Sydney Harbour was once a Royal Canadian Navy base.  It played a vital roll during World War II and helped establish the staging place for supply ship convoys headed to Europe.

Some of the more popular sights to see when you cruise Canada and New England, is Sydney's "Largest Fiddle in the World" located in front of the Joan Harriss Cruise Pavilion.  The scenic Cabot Trail is a popular activity for visitors and it is one of the most famous trails in the country full of astounding beauty.

Baddeck Lighthouse is a must see when you visit the town of Sydney.  And no trip is complete without seeing the famous Alexander Graham Bell National Historic Site.

​Things to do in Sydney, Nova Scotia 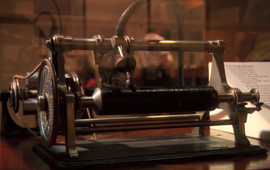 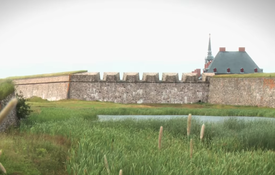 Fortress of Louisbourg National Historic Site
The Fortress of Louisbourg, a French fortified town in Nova Scotia is the largest of its kind.  You will enjoy a glimpse back to the 1700's while French soldiers march in the streets while you hear and feel the ground shake from cannon fire.

​Get to know Sydney, Nova Scotia