Halifax, Nova Scotia  is located in eastern Canada and it is the second smallest province by area.  It is 21,345 square miles. There is no point in Nova Scotia that is more than 37 miles from the sea and it is almost completely surrounded by the Atlantic Ocean.

English is the primary language but you will find that Nova Scotians who are of Acadian heritage speak French.  The first colonists were the Mi'kmaq people.  In 1605, the first permanent settlement arrived from Europe at Port Royal which was called Acadia.  In 1710, the British obtained control of the region and set up Halifax as the new capital by the year 1749.  The word Nova Scotia is derived from the Latin term for New Scotland.

Since 2010, more than two million tourists world wide have visited the province and most of that was by U.S. tourists.  There are more U.S. tourists that flock to Nova Scotia than any other nationality.  Many of the tourist arrive by way of cruise ship in the port of Nova Scotia.

If you are a foodie or love to drink, there are tons of pubs on the island.  There are restaurants galore and more pubs per Capita than any other city in Canada.

Nova Scotians are nicknamed the "Bluenosers" and that dates back to the 1700's.  A lot of Nova Scotians planted and exported Irish Bluenose Potatoes and they would leave blue dye on their noses, hence the name Bluenosers!

​Things to do in Halifax, Nova Scotia

HALIFAX CITADEL NATIONAL HISTORIC SITE
One of the coolest things you can see when you are in Halifax is the Citadel National Historic Site which is a star shaped strategic hilltop location that has a view of the Halifax harbor.  You'll learn what it was like for the soldiers and their families to live, work, and fight in this fort back in 1749.  For more information check out their website https://www.pc.gc.ca/en/lhn-nhs/ns/halifax 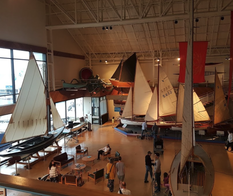 MARITIME MUSEUM OF THE ATLANTIC
When your ship stops in Halifax, make sure to take a trip to Canada's oldest and largest Maritime Museum.  The Royal Canadian Navy officers wanted a place where their naval past could be properly conserved and appreciated.  The museum was built in the Halifax Dockyard in 1848, and then was moved to its current location in the Halifax Citadel in 1952.   For more information check out their website https://maritimemuseum.novascotia.ca/

​Get to know Halifax, Nova Scotia