Bar Harbor, Maine is a town located on Maine's Frenchman Bay and the town is 63.11 square miles.  It is known as the "Gateway to the Acadia National Park".  It is located on Mount Desert Island (pronounced "dessert").  The town boast beautiful mountains and cliffs that overlook Acadia National Park.  The town is a popular tourist destination and is primarily occupied during the summer and fall months.  The Acadia National Park is located just a couple of miles from downtown, and the area is full of great activities like hiking, carriage roads, biking trails, bird watching and more.  There is a sand bar from town to Bar Island that is visible during low tide and it is wide enough to drive across were it to be legal to do so.  This makes for a great place to launch a kayak or a canoe.  The local industry is rich in lumbering, shipbuilding, fishing, and agriculture with a big focus on dairy.  During World War II, Bar Harbor was a hub for naval practices.

The town of Bar Harbor was discovered on the northeastern shore of Mount Desert Island.  The Wabanaki Indians knew it as "Pemetic", which means "range of mountains".  In October 1947, Maine was stricken with a severe drought which led to a horrible wildfire at a nearby cranberry bog.  It burnt until mid November and almost half of the eastern side of Mount Desert Island was a loss.  Included in that fire was the destruction of 67 palatial summer homes on Millionaire's Row as well as five historic grand hotels, and 170 permanent homes.   More than 10,000 acres of Acadia National Park were burnt as well.  The downtown business district made it through without harm fortunately.
​

​Things to do in Bar Harbor, Maine

GREAT MAINE LUMBERJACK SHOW
Celebrating 25 Years as the Best Entertainment in Down-East-Maine, Tina Scheer who was a castaway on CBS's Survivor Panama-Exile, delivers a show for all ages.  This is a fun and affordable show that features Tina Scheer and her crew in several lumberjack activities.  You'll see everything from Axe Throwing, Pole Climbing, Power Hot Sawing, Crosscut Sawing, Obstacle Pole Relay, Underhand Chopping, Log Rolling and More!  When visiting Bar Harbor, Maine, make sure you include this on your to do list!   For more information click here: Timber Tina's Great Maine Lumberjack Show 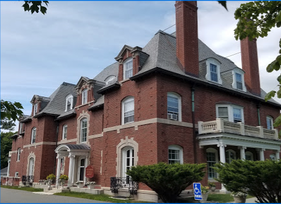 ​LA ROCHELLE MANSION & MUSEUM
One of our clients favorite excursion is the Bar Harbor's Gilded waterfront mansion La Rochelle on Mont Royal.  This amazing mansion is listed on the National Register of Historic Places.  Built in 1903, La Rochelle was the largest estate built along the shore of Bar Harbor's west street. La Rochelle is a beautiful Georgian Revival Mansion that was originally built for George Sullivan Bowdoin.  The home is situated on 2 acres of land and is a massive 13,000 square feet with forty-one lavishly decorated chateaux rooms, twelve bedrooms, and 9 bathrooms.
For more information click here:  La Rochelle Mansion & Museum

​Get to know Bar Harbor, Maine