The city of Rockland, Maine was originally known as part of Thomaston which was owned by the Great Proprietor Samuel Waldo.  It was settled between 1754 - 1763 by folks who migrated to the area by ship since there were no roads at that time.  By 1850, the town changed its name to Rockland and it became a city by 1854.  The town has a rich history of harvesting fish, lumber, lime, granite and agriculture.  Because of the untouched forest that lined the shores, the mountains were full of timber that was tall and straight and excellent for making masts for ships.  The town was also known for its trading industry with Europe which included dried fish, lumber, wheat, cloth, and rum to name a few.

Since the town was built on the shore, it was beautiful at night because there were a number of lime kilns which gave off such wonderful display of beauty when it was illuminated at night.  Between 1881 - 1899, the Rockland Breakwater Lighthouse was built by the federal government and it became the fourth busiest port on the eastern seaboard.

The city also had a fantastic electric trolley system which was created in the 1890's by businessmen Rockland, Thomaston, and Camden Street Railway.   There were also several shipbuilding companies located between the wharfs and lime kilns and they would produce from two to ten ships per year.  Shipbuilding blossomed there and by 1853, some 400 ships had been built using the 12 area shipyards.  Deacon George Thomas was famous for his Clipper Ship Red Jacket which was built in his shipyard at Warren Street in 1853.

Prior to the making of freezers, large blocks of ice on Lake Chikawaukie were cut in the big blocks of ice during the first quarter of every year.  They stored them by packing them in sawdust and stacking them on top of each other which made them last all summer.  The town was a haven of salt houses, ice houses, canneries, and sardine and lobster companies.

​Things to do in Rockland, Maine

MAINE LOBSTER FESTIVAL
Every August, Portland is home to the Maine Lobster Festival.  For five days of fun the festival is a great place to feast on fabulous Maine Lobsters.  There is so much good food, rides, entertainment and more in celebration of the awesome seafood.
For more information check out their website:  https://www.mainelobsterfestival.com/ 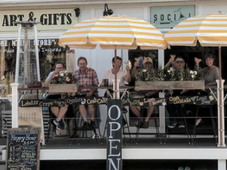 ​MAINE FOODIE TOURS
What better way to experience the yummy fresh seafood of the local Portland, Maine area than by way of a Maine Foodie Tour.   The tours include some of the best food prepared from the areas abundance of organic produce, local dairy products, and fresh seafood from the harbors.  For more information check out their website:  https://www.mainefoodietours.com/

​Get to know Rockland, Maine