Pictou, Nova Scotia is located on the north shore of the Pictou Harbor which is approximately 6 miles north of New Glasgow.  Pictou is considered the “Birthplace of New Scotland” because it’s where the first group of Scottish immigrants landed in 1773.

This quaint little town offers period homes on tree lined streets, friendly and hospitable people, with the mix of old world charm and modern facilities.  The town is still used as a shipping port, for tourism, and primarily to serve the surrounding rural communities.
The name Pictou was derived from the Mi’kmaq language and it means “explosive place”.  There was methane found in the area that would bubble up from coal seams below the harbor and this was thought to be where they got the name from.

The Pictou Waterfront offers outdoor concerts all summer long.  Every July and August to September 2nd, from 6-8pm, the marina stage at the waterfront breaks out with a mix of toe tapping music.  You’ll hear genre’s like rhythm and blues and rock n roll, and the best part is that its free.

The deCoste Performing Arts Centre is also another great venue when you’re looking for things to do while in port at Pictou.  The centre is one of the finest facilities for the performing arts on the Eastern Canadian seaboard.  They opened in 1982 and it has delivered quite the list when it comes to “who’s who” in the entertainment world.  It is located in the historic district of town.
​
One of the most interesting attractions in town is the Hector Ship that carried Scottish settlers to Nova Scotia.  There is a replica ship located at the Hector Heritage Quay which the heritage center ran by local volunteers.

​Things to do in Pictou, Nova Scotia 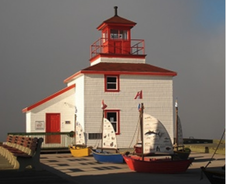 ​
​CARIBOU LIGHTHOUSE
The Caribou Lighthouse in Pictou, NS was rebuilt 3 times.  Take a visit to find out why they were rebuilt and some of them were relocated.

​Get to know Pictou, Nova Scotia