This beautiful seaside eighteenth century city is a favorite New England summer resort town.  Its historic mansions is testament to the thriving upper class that lives there.  Originally founded in 1639 and part of the settlement at Portsmouth, it was founded by 8 settlers.  However, inside of a year one of the eight broke off and joined forces with other followers to begin the settlement on the side end of the island, now known as Newport.   The city is rich with history and home to many "firsts" in the country.

This lovely town has one of the highest concentrations of colonial homes in the United States located in the downtown historic district.  The town also has numerous mansions from the Gilded Age deemed "summer cottages" for the elite.  Many of the styles were copied from some of the royal palaces in Europe.  The oldest tavern in the U.S. called the White Horse Tavern was built there in 1673.  It is also home to one of the nation's oldest lending libraries Redwood Library and Athanaeum.

The town of Newport has deep roots in the United States Navy.  In 1861 it was home to the U.S. Naval Academy, and since then it's had many other Navy connections like the Cruiser-Destroyer Force of the Atlantic Fleet.  Today the Naval Station Newport is home to the Naval War College, the Naval Education and Training Command center, and the Surface Warfare Officer training amongst other schools.

Some fun facts about Newport:  The nation's first ferry service operated from Newport in 1657.  In 1687, it was the first city to pass a traffic ordinance.   In 1745, the Schoolhouse in Portsmouth was built and remains the oldest schoolhouse in the country.  The first "duplex" house was built in Newport in 1750 and was located at 57 Farewell Street.  The first circus in the United States was hosted in Newport in the year 1774.  In 1886, the first international polo match was held.  The first amateur golf championship was hosted here in 1895, followed in the same year by the first U.S. Open.   In 1899, the town hosted the first National Lawn Tennis Championship.

​Things to do in Newport, RI 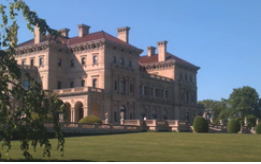 The Breakers
This 1895 mansion is a must see!  Owned by the Vanderbuilt's, this mansion was the summer cottage for the family.  It is absolutely incredible inside and out!  https://www.newportmansions.org/explore/the-breakers 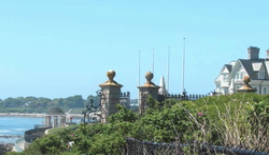 The Cliff Walk
One of the best excursions you can take is the Cliff Walk.  This beautiful 3.5 mile walk along the gorgeous rocky shoreline should not be missed.  Words cannot do it justice.  ​http://www.cliffwalk.com/

​Get to know Newport, Rhode Island