Charlottetown is the capital of Prince Edward Island, and it is located on the southern coast of the province.  The city was birthed in 1864 when the Province House National Historic Site hosted the Charlottetown Conference.  Victoria Row offers several great activities such as shops, dining, the Confederation Center of the Arts.

This historical town has royal roots and draws in hundreds of thousands of visitors from around the world.  The province of Prince Edward Island is the smallest but it's huge on culture and beauty!

Its original name was called Port la Joie, a French settlement.  However in 1763, it was renamed in honor of Queen Charlotte who was the wife of George once the island was transferred to Britain.

One of the most popular claims to fame is the largely popular Anne of Green Gables novel was first published in 1908.  Be sure to visit the house and land that inspired the book when you visit Charlottetown.

The land has over 88,000 acres of potatoes planted each year.  Shellfish lovers can get their fill if traveling in June or September as it the island hosts all you can eat lobster festivals.

15% of the Islands electricity is wind power generated making it very eco-friendly.  One of the islands largest population of wild animals is the Red Fox.  They are commonly seen in urban and rural parts of the island and the Red Fox has been designated the official animal of the province.

​Things to do in Charlottetown, Prince Edward Island

VICTORIA PARK
No trip to Charlottetown, Prince Edward Island would be complete without a stop by Victoria Park.  It's the most popular and beautiful park in town.  There are 40 acres of walking trails, playground and horseshoe pitch, swimming pool, and the gorgeous boardwalk along the waterfront.
For more information check out their website https://www.attractionscanada.com/Prince-Edward-Island/Prince-Edward-Island/Victoria-Park.asp 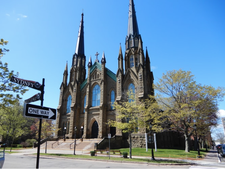 ​ST. DUNSTAN'S BASILICA PARISH
One of the most beautiful and soft after attractions in Charlottetown is the St. Dunstan's Basilica Parish.  Built in 1721 when two missionary priests began ministering to the spiritual needs of early French settlers and needed a place to do so.
For more information check out their website http://www.stdunstanspei.com/