Saint John is located on the Bay of Fundy in the Province of New Brunswick, Canada.  Because of its location, to the the Saint John Harbor and the Saint John River at Grand Bay, it is a deep water port that remains ice free all year long.  It's best known for its Reversing Rapids which is an intriguing phenomenon that is the result of the bay tides colliding with the Saint John River.  The reversing falls located at the river's mouth have very strong tidal fluctuations (almost 30 feet) that reverse several miles upstream twice per day.  The total area of Saint John's is 121.8 square miles.  Saint John is a great location to view the Bay of Fundy which is known for having the highest tides anywhere on earth (greater than a four story building).  Some of the rarest whales in the world are found here such as the right whale, humpbacks, finbacks, and minkes.

Saint John is a bilingual city where French is the language of about 1/3 of its people.  John is also known for its quaint city market which is housed in a building that was built in 1876 and is a must stop for any visitors to the town.  The town is also known for several industries like lumbering, pulp and paper milling, oil refining, construction, and shipbuilding.  The city is a diverse place full of rich history, arts, and culture.  The town has fantastic restaurants and you won't want to leave town until you try a Saint John Lobster roll.  It is also known as the French Fry Capital of the world!

Saint John's Stonehammer Geopark is a UNESCO recognized location due to its exceptional geological significance.  Saint John is a very hilly area due to the coastal mountain ranges the St. Croix Highlands and the Caledonia Highlands.  There are several freshwater lakes in the region as well.  The Hartland Covered Bridge is the longest covered bridge in the world.  Built in 1901 it was an engineering feat of its time at 1,282 feet.

​Things to do in St. John, New Brunswick 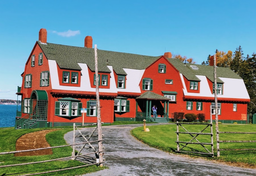 ​
​ROOSEVELT CAMPOBELLO INTERNATIONAL PARK
The Roosevelt Campobello International Park is the summer home of Franklin and Eleanor Roosevelt.  There is a nature park on the island as well as a fantastic indoor museum you won't want to miss. 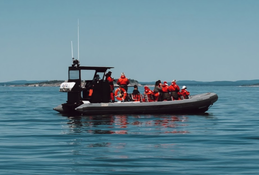 ​FUNDY TIDE RUNNERS
One of the most popular activities on a New England cruise is a trip to watch the whales.  At Fundy Tide Runners you will step aboard and unforgettable experience as they have a 95% success rate for spotting whales.