Sept-Iles, Quebec is sort of a hidden gem when it comes to Canadian vacation spots.  This lovely little town whose name Sept-Iles translates in English to “Seven Islands”.  Located on the North Shore region of Quebec, it lies on the North Shore of the Star Lawrence River.  The island is made up of 7 islands which provides a natural barrier to the bay.

Sept-Iles was a big shipping outlet for iron ore that was brought to the coast by railway.  It is no longer used for this purpose, it still remains a very important economic center for the region and is the largest producer of iron ore in Canada . The island is also home to the largest producer (Alouette) of aluminum in North America.

Named by Jacques Cartier, the town was discovered in 1536, and founded in 1650. The town’s first inhabitants were a variety of indigenous people like the Montagnais and Innu people.  The nomadic tribe of the Innu people learned to live off the land’s fishing, hunting, and berry picking in order to survive.  Their ability to gain knowledge of the areas fauna and flora are still in use in survival today.  They would spend the summer months gathering so they could live and survive in the winter months.  But the town has grown significantly since the Innu first inhabited the island.  The town is linked via ferry with the Gaspe’ Peninsula.  The town is pronounced “Sets Ill”.

​Things to do in Sept-Iles, Quebec 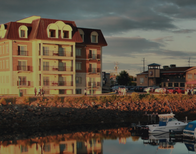 ​Chateau Arnaud
Located on the Sept-Iles harbor, the Chateau Arnaud is the number one choice is overnight accommodations.  This beautiful yet quaint hotel offers unmatched views of the bay.

​The Destination
The Destination Tours offers several choices of shore excursions, 12 to be exact, and if you don't find one, they'll customize one for you!

​Get to know Sept-Iles, Quebec