The beautiful town of Corner Brook is located on the west coast side of the island of Newfoundland and it is the northern most city of Atlantic Canada.  The glacial little town is surrounded by some of the most stunning wilderness on the globe.  It has plenty of local shopping and restaurants to quench your appetite.  The city was named the "Forest Capital of Canada" in 2002.

The town was first surveyed in 1767 by Captain James Cook and had a population of less than 100 inhabitants as of the mid 19th century.  Captain Cook was also responsible for naming many of the area's fishing villages.  It was incorporated in 1956, and it's rich with legends and stories, inventors and explorers.  The town is also a big producer in the pulp and paper industry.  They are also known for lumber work, they're railway, fishery, and curling.  Corner Brook is also home to a World Class Salmon River, Humber River.

Corner Brook thrives in promoting the Arts and Culture of their community through visual to theatre arts and more.  In fact, the town holds the Stage West Theatre Festival in July, the Gros Morne Summer Music Festival in July and August.

One of the coolest sights you'll want to see when you visit, is the notorious natural rock formation called "Man in the Mountain".  Legend has it there that long ago, pirates buried treasure there and the man in the mountain keeps guard over it.

The nearby village of Little Rapids is home to Strawberry Hill Resort, which is where Prince Charles was supposedly conceived.  It is also the smallest community that hosted the 1999 Canada Winter Games.

​There are 20 species of whales found in the surrounding ocean at various times of the year.  That makes it home to one of the best places to whale watch in the world.

​Things to do in Corner Brook, Newfoundland 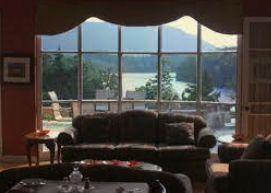 ​Strawberry Hill Resort
Inn & Chalets
​Strawberry Hill is a luxury property located in the city of Corner Brook, Newfoundland.  The site was originally developed by Sir Eric Bowater, a British papermaker.   He built the property for his long list of distinguished guests and dignitaries.  Included in those were The Queen of England, Prince Edward and Prince Phillip.  The resort is nestled in the mountains of Humber Valley with a variety of great outdoor activities at your doorstep.

Corner Brook Stream Trail
The Corner Brook Stream Trail originally started with a few walking trails but has quickly grown to a network of trail beds, pedestrian bridges, staircases, viewing platforms, and walkways.  This beautiful area offers cruise passengers an opportunity to stretch their legs and enjoy nature nearby the cruise ship terminal.

​Get to know Corner Brook, Newfoundland