Baie-Comeau is a town in the province of Quebec that is located approximately 260 miles north east of Quebec City.  Located on the shores of the Saint Lawrence River.
The town has two urban area populations.  One within city limits called Baie-Comeau proper with a population of 9,610.  The other is Hauterive proper with a population of 11,549 as of 2016.
The city got its name from the Comeau Bay which was named after the honorable Napoleaon-Alexandre Comeau who was a Quebecois naturalist.
On the eastern side of the current town, a paper mill was constructed in 1936 by the publisher of the Chicago Tribune.  This was the beginning of incredible growth which led to Baie-Comeau being incorporated a year later.  Then in 1950, the village of Saint Eugene de Manicougan became the Municipality of Hauterive when it was incorporated.
The first sawmill was erected in Cote-Nord region by brothers Henri and Damase Jalbert.  However, it was closed down in 1907 because their timber stock was swept into the St. Lawrence River.
The older section of Baie-Comeau is called Vieux-Poste (Old Post) located near the mouth of the Amedee River.  This is the same location that the Saint Eugene de Mancouagan Mission was founded on in 1898.
The city has seen its population boom and decline over the years.  Especially between 1996-2006 when it dropped from 25, 554 to 22,402.  The reason for the decline was chalked up to the fact that many baby boomers who weren’t originally born in the city would retire, then move some place else.
There are so many great reasons to visit Baie-Comeau, but we think the local seafood is probably one of the best.  Another great reason to visit is their massive dam.  Formerly called Manic 5, but now is called the Daniel Johnson Dam, it is one of the world’s largest multiple arch and buttress dams.

​Things to do in Baie-Comeau, QC 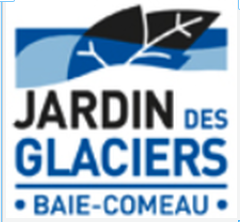 ​Discover the thousand-year-old natural amphitheater called Shell Valley.   You will be astonished at the millions of seashells that have been piled on top of each other for more than 10,000 years.  The Goldthwaith Sea (one of five ancient seas in Quebec), was directly responsible for the immersion of the territory by this post glacial whirlpool.

​Get to know Baie-Comeau, QC