The small town of Lunenburg, Nova Scotia was established on June 22, 1753 and it is one of Canada’s oldest cities.  The name of the town hasn’t always been Lunenburg though.  It was originally called “Merligueche”, with various different spellings.  The name Lunenburg was given to honor King George II who was the Duke of Braunschweig-Lunenburg.  The name Lunenburg is not a traditional British name, but it was selected to honor the British monarch George III’s reign (better known as the House of Hanover which was German).
​
The town was originally a French settlement, but over time, it was an area that was battled over by the British as well.  The Mi’kmaq people were the indigenous tribe in the area as well.

The province of Nova Scotia is almost completely surrounded by water except for the small mass that connects the peninsula to New Brunswick.  The town is known for its beautiful and colorful facades on the buildings.

As one of only 2 North American urban communities, Lunenburg was designated a UNESCO World Heritage site.  They were awarded this title because about seventy percent of the original colonial buildings still stand to this day in the town.   UNESCO’s position on Lunenburg is that it is in need of protection due to the uncertainty of the Atlantic fishery.

Old Town Lunenburg has is a good sized lumber industry, and has the second largest fish-processing plant in Canada.  The town is also known for its rum running operations, farming, shipbuilding, and trade.  A large portion of the town is employed in the fishing industry.  The biggest fleet of deep sea deep sea fishing

This quaint little town has narrow streets and colorful buildings that were built on a steep south-facing hillside.  Because of the beauty of Lunenburg, is has become a very attractive region for the film industry. ​

U.S. tourists haven visited Lunenburg’s picturesque coast more than any other nationality in the world.

​Things to do in Lunenburg, Nova Scotia 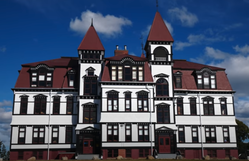 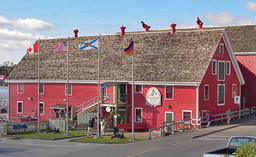 ​Get to know Lunenburg, Nova Scotia