Gaspe’ is a town rich in history and we encourage everyone to enjoy this cruise destination as you get a closer look into what makes it such a special place.

Jacques Cartier landed in Gaspe’ Bay in 1534.  He laid claim to the land for the. King of France and found the area was occupied with the Iroquoian Indigenous people.  Gaspe’ is located at the tip of the Gaspe’ Peninsula about 650 km to the northeast of Quebec City.  Gaspe’ is pronounced Gas-Pee.  Most folk say the name came from a Micmac word which means “land’s end”.  However, there are other theories that say the name was a form of the Basque word “geizpe” or “kerizpe” which means shelter or place of refuge.  Another theory says it was named after the Portuguese explorer GAspar Corte-Real.

The city of Gaspe’ stakes claim to the title of being called “Cradle of French America”.   Reason being, explorer Jacques Cartier in 1534 withdrew in the bay after he lost an anchor during a storm.  At that time, he planted a wooden cross with the king’s coat of arms on it and the sentence “Vive le Roi de France” (meaning “Long live the King of France”) which in his eyes was staking his claim.
Gaspe’ became an important epicenter for commercial fishing and remains so still to this day.  The town also has its share of shipbuilders and lumber merchants.

By 1855, Gaspe’ was incorporated as a village municipality, and by approximately 1861 it was designated a duty-free port.   Because there were about 40 to 50 European ships docking at that time, numerous countries opened consulates there, including the United States, Brazil, Italy, Portugal, and Norway.
​
World War II brought about 3000 naval soldiers who were stationed there to help patrol the Gulf of Saint Lawrence against the German submarines.  To celebrate the 400th anniversary of Jacques Cartier arrive to the area, a 32 foot high monolithic cross that was erected in 1934 when the Canadian government had it commissioned and installed.  Cut from a block of gray granite, the cross weighs more than 42 tons and had to be transported by two railcars.

​Things to do in Gaspe', QC 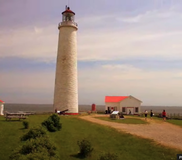 Cap-des-Rosiers
The Cap-des-Rosiers Lighthouse near Gaspe’, QC is Canada’s tallest lighthouse at 112 feet tall and located overlooking a 50 foot cliff.  It was built between 1853 and 1858 with the first lighting March 15, 1858.  With  the multifaceted lantern, the tower had to be replaced in 1984 from an exterior of brick, stone, and stucco cladding, to beautiful white marble. This magnificent lighthouse played a huge part in the growth of ports along the St. Lawrence River, especially those located in Montreal and Quebec.  The lighthouse has 122 steps and 9 floors. 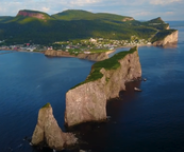 ​
​Perce Rock
One of the signature attractions in Gaspe' is Perce Rock.  Perce Rock is actually limestone that was formed more than 400 million years ago during the Devonian era.  Linked by a sandbar at low tide, the rock was the product of vast tectonic forces that raised the rock and mainland from where it was formed on the sea floor, to its current position above sea level.

​Get to know Gaspe' Quebec City