The city of Saguenay is located in the region of Quebec, Canada and located on the Saguenay River.  It is the 7th largest city in Quebec.  Saguenay was formed in 2002 when they combined the districts of Chicoutimi and Jonquiere, and La Baie.  Saguenay is home of the famous Saguenay Fjord which winds its narrow way to the sea between beautiful high cliffs.  The fjord is 62 miles long and located north of Quebec City.  Saguenay is an extremely beautiful area of Quebec and just happens to be the only navigable fjord in North America.  The fjord was carved by glaciers during the Ice Age.  The Saguenay Fjord with it's long glacial valley and high rocky cliffs is the only fjord in North America that's occupied.   Some of the cliffs are as much as 1,148 feet high, and the river deepest part of the river is 902 feet.  The villages along the fjord are considered the "Most Beautiful Villages in Quebec".

Chicoutimi, originally settled in 1676, was a French trading post for the fur trade and timber mills.  Jonquiere was home to the world's largest aluminum plant as well as Shipshaw which was the world's largest hydroelectric station in its time (1942).  In 1842, La Baie was founded by a group of employees that worked for Charlevoix Forestry Company.   Together, these three towns makeup what is now known as Saguenay, Quebec.

Today, Saguenay is a rail hub and a center for commercial, industrial, and administrative sectors.   Because of the sawmills in the area, it's a large producer of paper, pulp, furniture, and window frames.

The area is rich in fantastic places to eat and drink.  Sample some of the local prime port, cheddar cheese made in Saguenay, or some of their edible plants like wild violets and mayflowers.  You'll also want to pickup some of their blueberries, be it in the form of jam, tea, or even chocolate covered blueberries.

​Things to do in Saguenay, Quebec 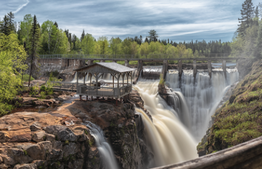 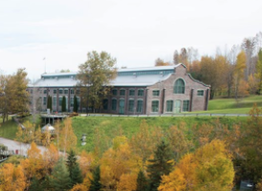 ​The Pulperie de Chicoutimi / Regional Museum
Originally a pulp mill, this centuries old mill and now a museum is a tribute to the Pulp Empire of the era.  Built on the banks of the Chicoutimi River, the structure with its old stone walls and numerous exhibits is a great excursion for getting to know the Saguenay area.

​Get to know Saguenay, Quebec